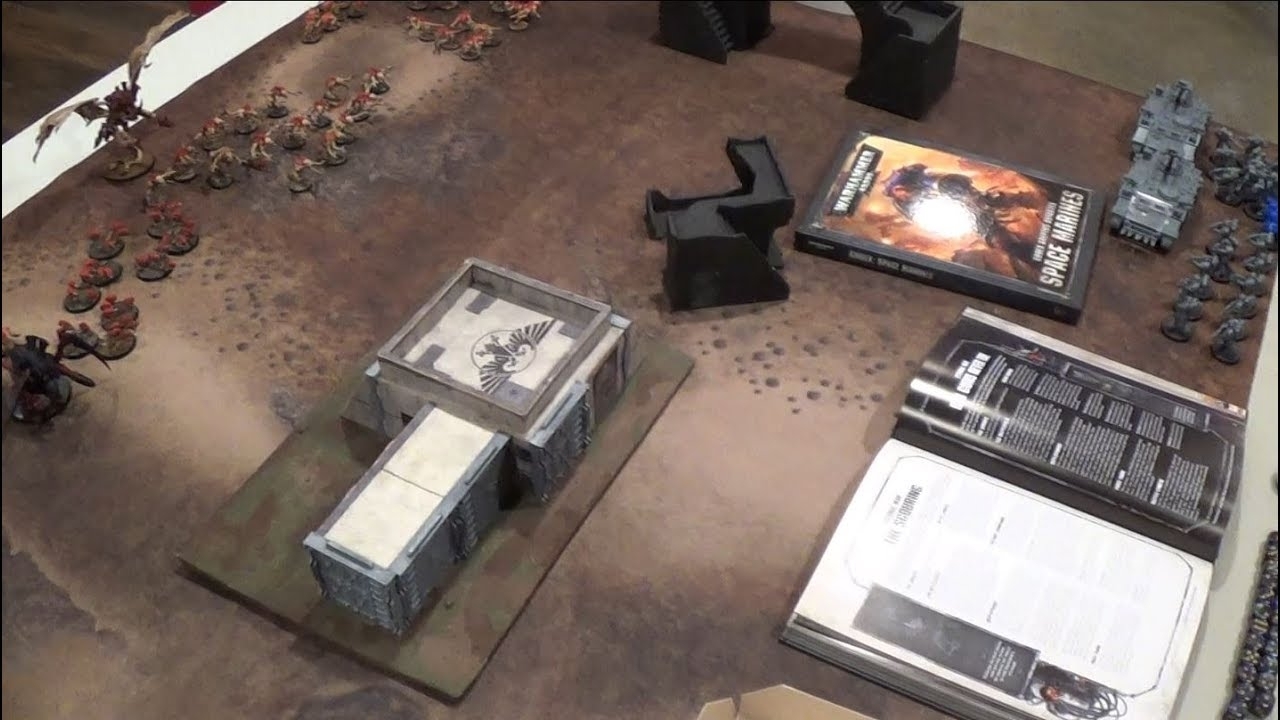 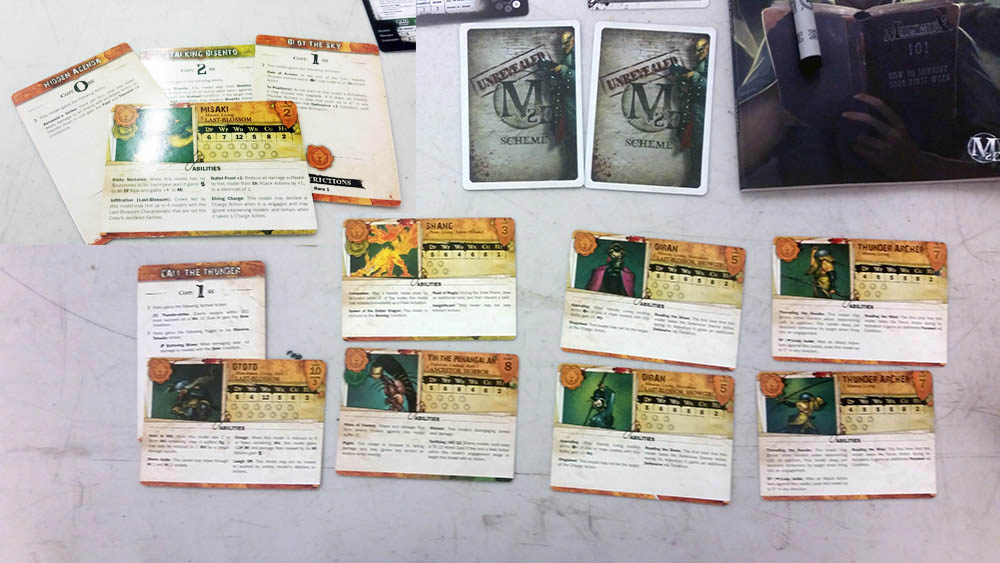 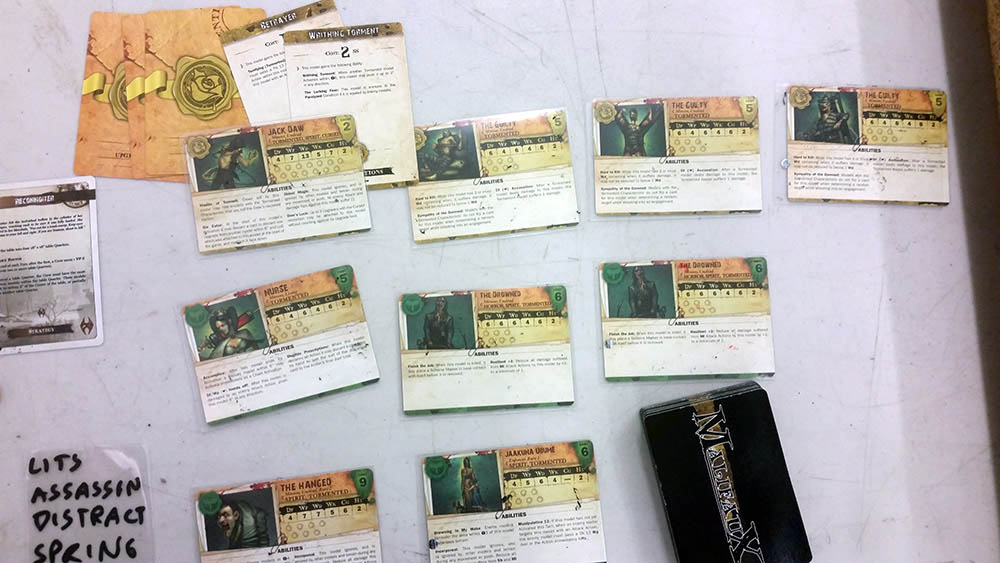 We grabbed a lot of terrain and just sort of packed the table with it, so the board looked like a rugged mountainscape with rock piles and climbable terrain everywhere, with charge lanes and gentle sloped hills in a few places.

There was a lane just along the edge (Chung's Right, my Left) that was actually the site of 75% of the game's action. I'll call that The Lane. Most of the action happened along The Lane, with models pressed up against the table edge. I think some of that was just because of the Reconnoiter Strat, which encourages staying away from the center, and some of that was a result of how we deployed and played. And maybe we were just being lazy because that was the edge closest to where we were sitting. 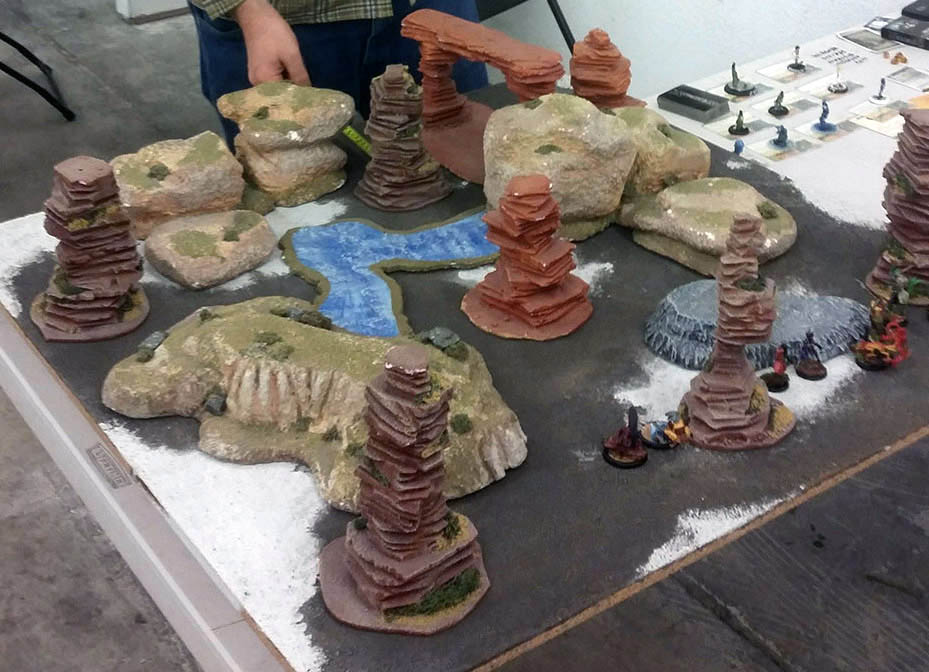 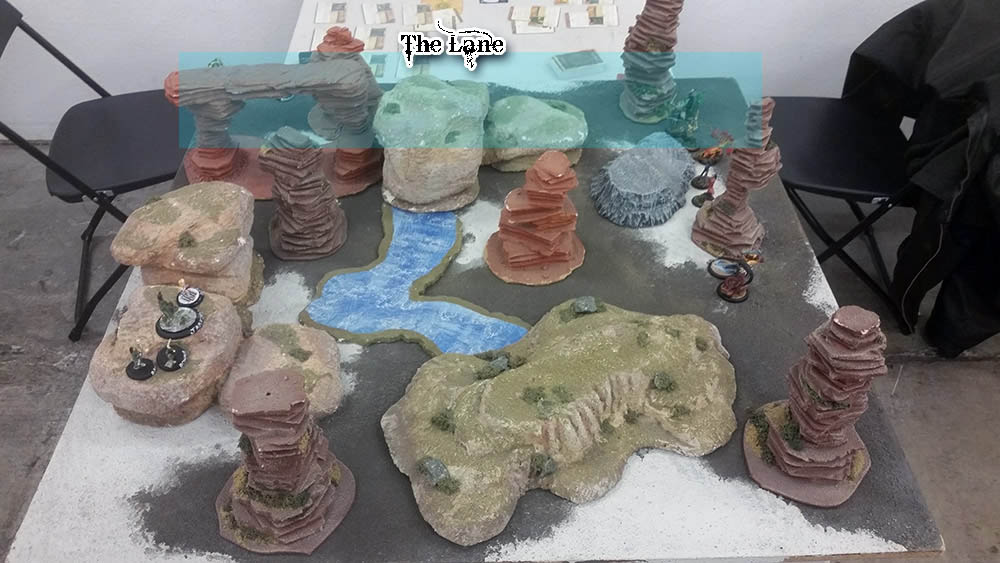 We flipped Standard Deployment. I won the flip and chose for Chung to deploy first.

Misaki deployed her Thundery Crew in a line along the front of his deployment zone, mostly to his right, close to The Lane. In order, it was the two archers, then Misaki, Shang, and two Oiran. Further along the line on the other half of the table were Ototo and Yuk. 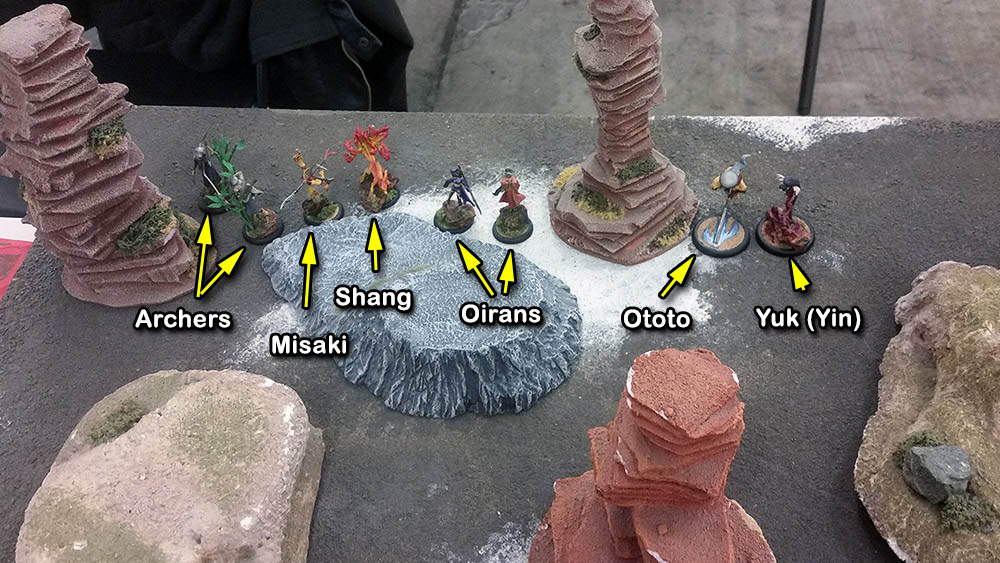 Jack Daw deployed his Tormented Crew in two groups, too. Along the very edge was Jack Daw and the Guilty all in a line (so that the Guilty could push toward Jack and each other and slide past a piece of blocking terrain) with Hanged nearby (since it didn't care about blocking terrain.) In the other corner, on top of some stepping-stone terrain, I had a second cluster of Jaakuna, the Drowned, and the Nurse. 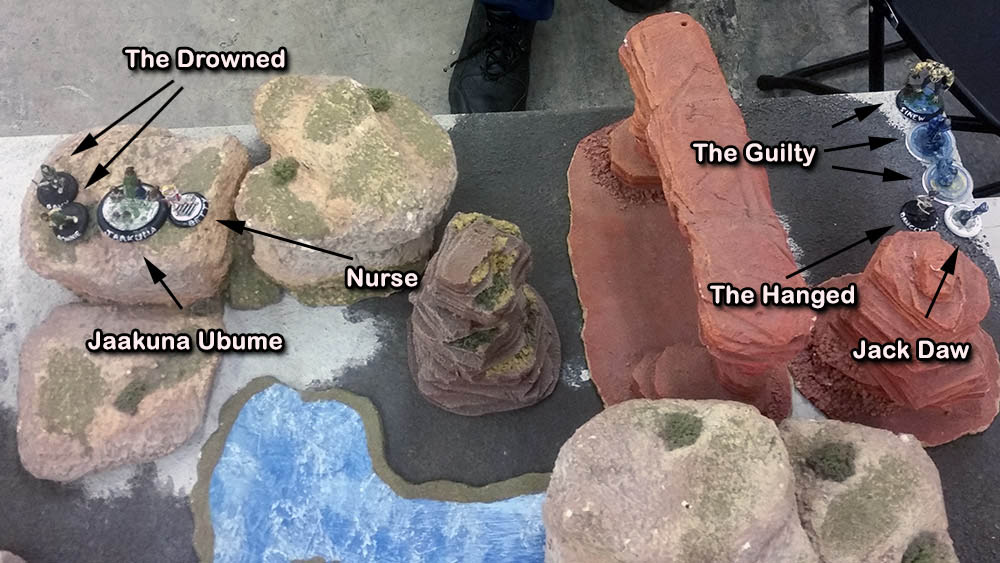 Remember that table edge I mentioned? The Lane? Yeah, there was a problem at the very beginning there. I knocked one of my Guilty off the table (since it was just on the edge) and it fell and broke. Rather than buy glue from the store and try to fix it, I just proxied a Student of Sinew so we could keep playing. Poor ersatz Guilty. That guy ended up just sitting there anyway, though.

In which everyone moved up, and the sanity of Archers was pushed to the brink.

Chung forgot Shang's Rush of Magic, but noted it and remembered for the rest of game. We both soulstoned for better cards.

In The Lane, Jack Daw moved up and dropped a Scheme Marker for no reason as a cheap and crappy bluff because I didn't want him to get too far away from the Guilty. Then did Defensive.

Generally everything pushed up, on both sides. A Guilty made an Archer Tormented. The other one climbed up onto a low rock. The Hanged passed through some terrain and hid behind a rock near The Lane.

Misaki activated late and noticed that there was a line of Oiran blocking her way. No problem. She Downbursted to move the Oiran aside and push that non-Tormented Archer off the other side of the rock. Move aside and let your master through. Then Misaki stalked Jack Daw, because she's Misaki and assassinating the opponent's Master is at the top of her resume.

At the end of the turn, the poor archers tried to Blot the Sky. Tormented Archer fired at Jack Daw, and got past Jack's Terrifying (Tormented), but between a negative twist and Jack's Defensive positive twist, didn't come to close to hitting. The non-Tormented Archer tried to shoot the hiding Hanged (since they can ignore LoS) but failed a Terrifying check. Since it was off-turn, the Archer got Paralyzed for real. Ouch. 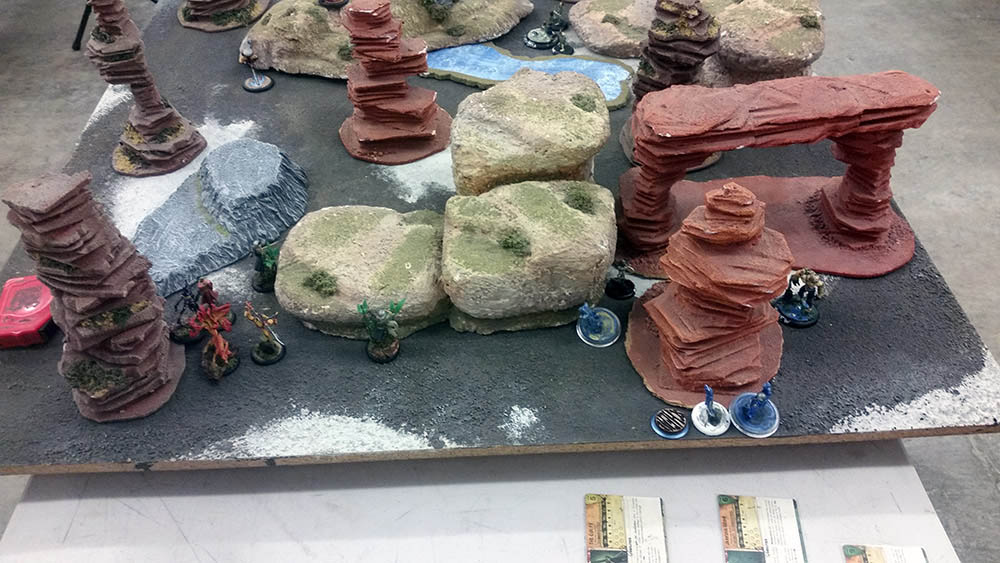 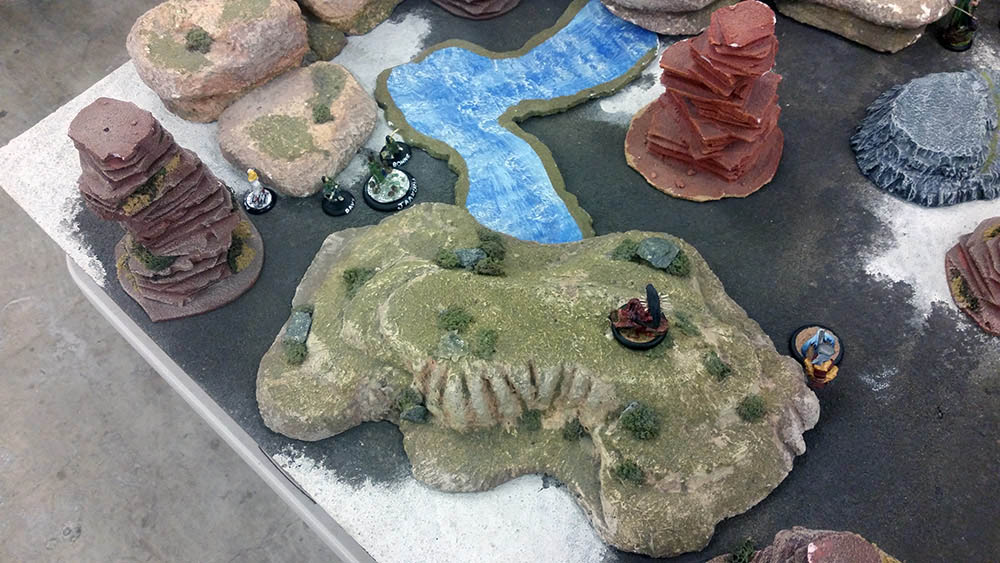 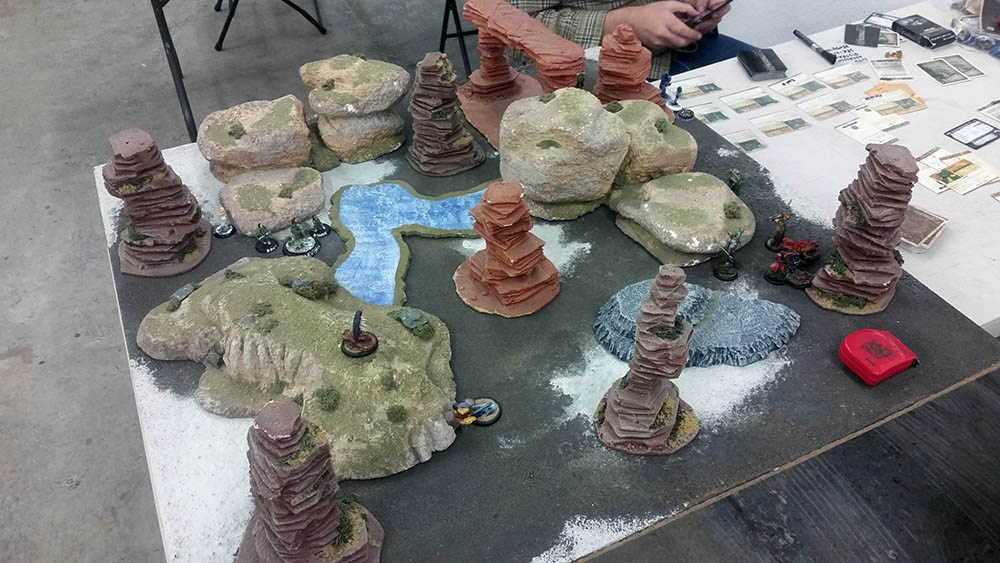 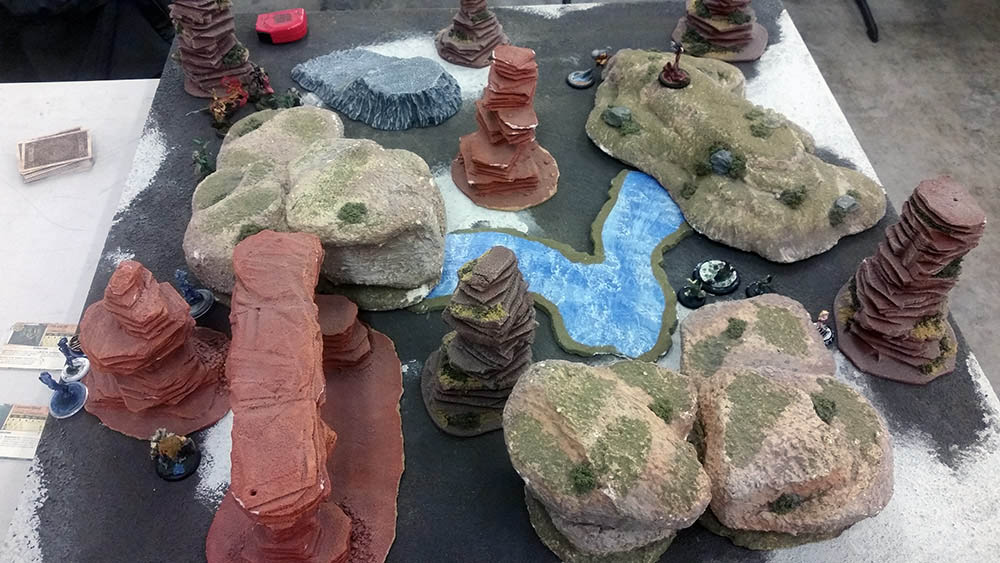 In which Jack Daw overextends himself, a burning fox is an assassin girl's best friend, and everyone gets distracted.

Jack Daw Walked up (and Misaki declined to Stalk), and attacked an Archer, using the Ghost of Malifaux to place close enough to Misaki to attack her. Jack Daw attacked Misaki with his Noose, and cheated up to Red Joker to do 6 damage, plus gave her Firing Squad Injustice. Then he did Driven by Injustice to move Misaki and the Archer away, hoping but failing to move her far away enough that she couldn't hit him back.

Misaki burned Blot the Sky to move and protect the Archers, then easily just charged in and attacked Jack Daw twice, then again as a (0) action thanks to Stalking Bisento. She took a lot of Firing Squad Injustice damage for that, but Soulstoned to ignore some of it. Even with Jack Daw using a Soulstone on defense, Misaki got Jack down to 4 Wd and Distracted him. She was near dead at that point herself from Firing Squad Injustice... but Shang then Chain Activated and healed Misaki back up, because Shang is like that.

A Guilty pushed up to the Tormented Archer, Walked around it, and Distracted Misaki. At this point, it was pretty obvious that we had both taken Assassinate and Distract.

Then The Hanged moved out and attacked the Distracted and Tormented Archer. The Archer cheated down to lose the duel and die, because it was Distracted and wanted to deny Jack Daw the VP.

The Oiran moved up and hit Jack Daw, poisoning him and bringing him to the cold and injust brink of destruction.

On the other side, Jaakuna Lured Yuk, and failed once. The second time, Yuk cheated down because she wanted to get closer and tarpit. Yuk moved up further. A Drowned distracted Yuk, bringing me back up to two distracted models, and the Drownedball beat up on Yin but didn't kill her.

At end of turn, Misaki didn't get recon VP, since she had herself and two Oiran in her corner (the surviving Archer was too close to the center and Shang was a Peon) and Jack Daw had himself and two Guilty. Jack Daw got recon VP for his two segments.

One Guilty literally just hung back and did nothing but control a quarter for Recon VP the whole game. That was the one I'd proxied as a Student of Sinew anyway though so it was a appropriate for it to hide in shame. 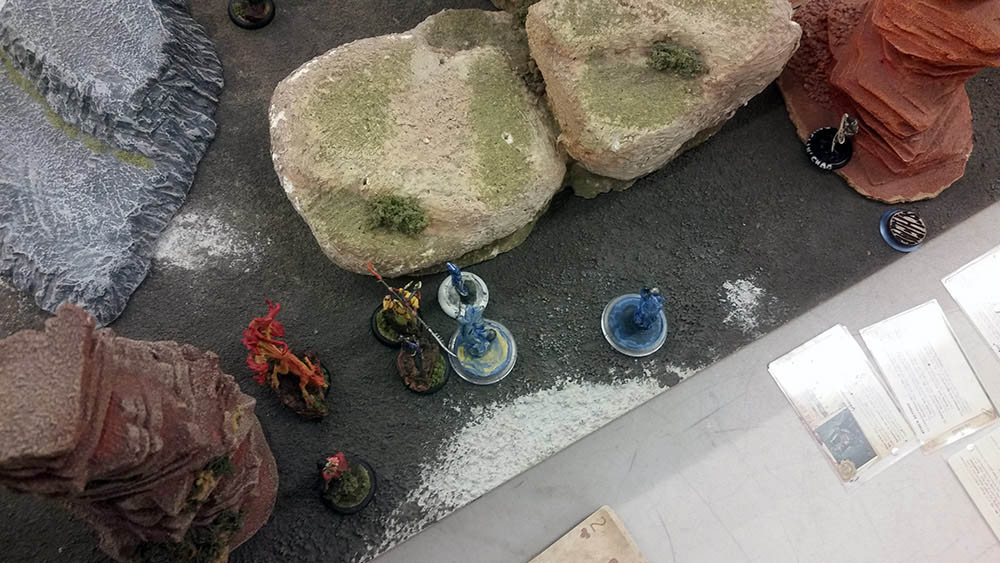 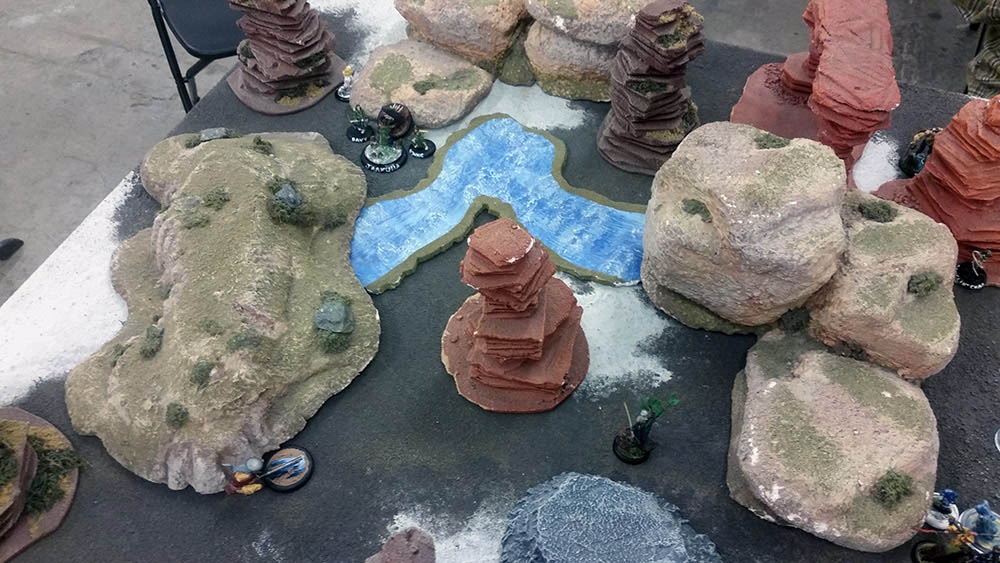 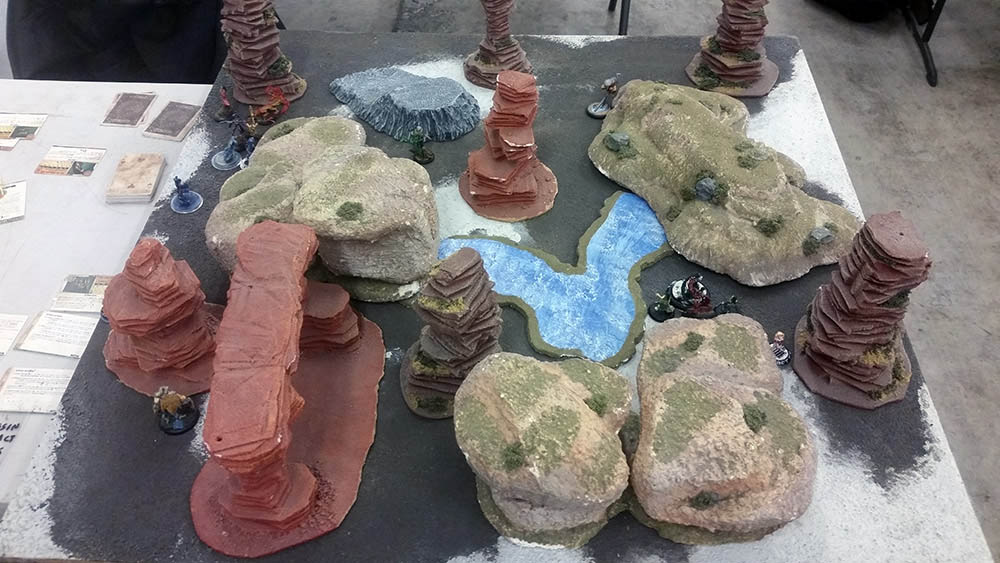 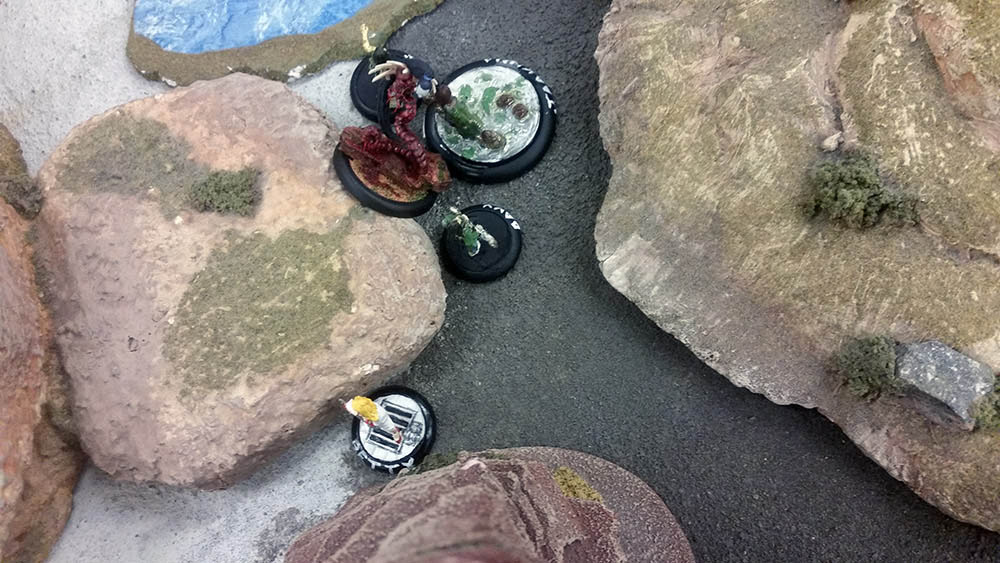 In which Misaki owns The Lane.

The initiative flip was a tense one here, since Jack Daw was near death but is good at escaping. We were both out of soulstones too. We both flipped a 10! Misaki just barely won on the reflip.

I tried to push Tormented Misaki away but she just charged in of course, and she killed Jack Daw with two hits, earning 3 VP for Assassinate. This caused Misaki more Firing Squad Injustice damage, but also gave both Oiran Fast and Focused. Then Misaki moved up and missed the Guilty. Shang chain activated in order to die and heal Misaki back up. So noble!

On the non-Lane side, Yin distracted a Drowned, and then Jaakuna, her toxic territory, and two Drowned teamed up to kill Yin. This involved missing a lot until a Drowned remembered to Focus and attack.

Both of us got VP for Recon. Chung got VP for assassinate and distract. 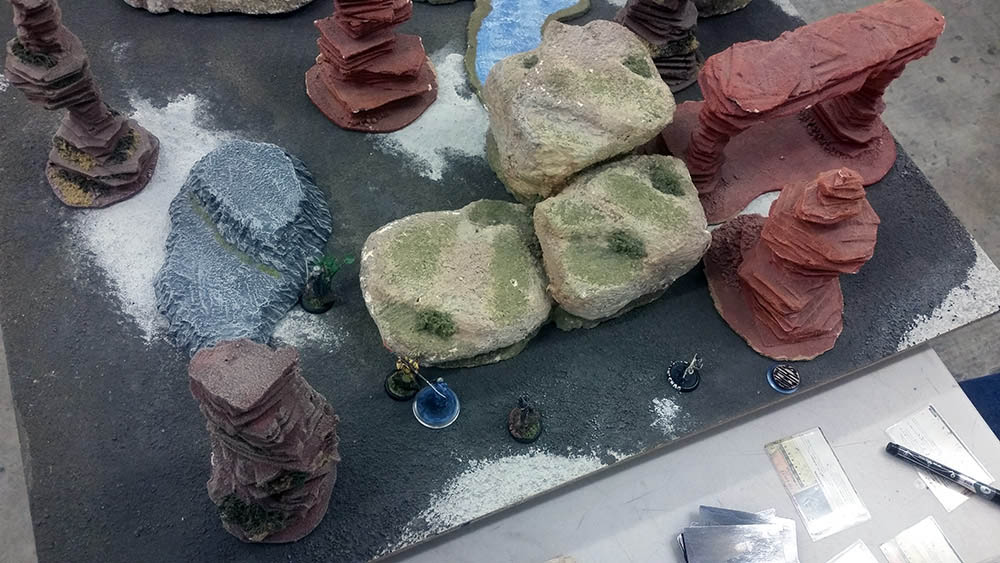 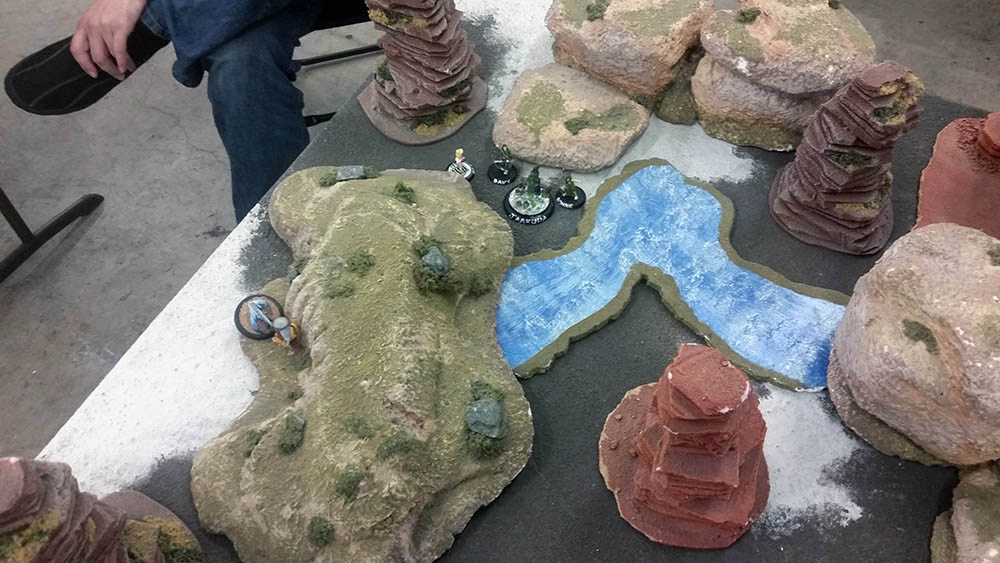 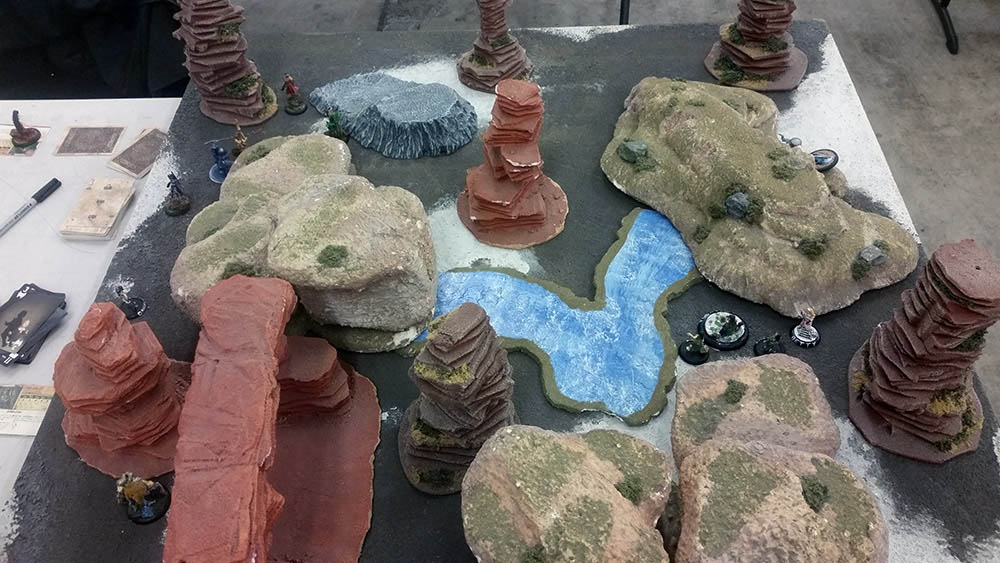 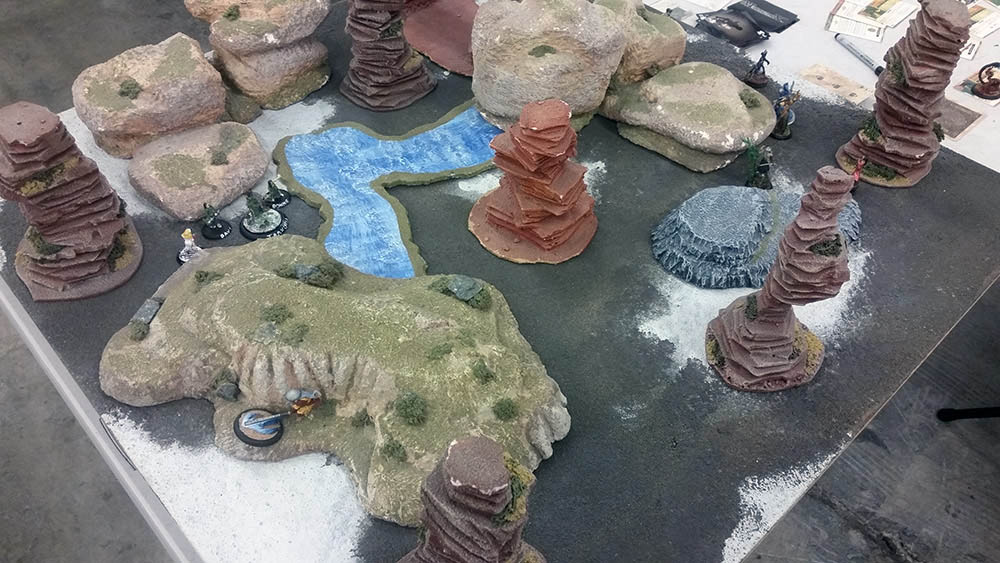 In which Misaki does Penance, but doesn't gain any VP.

Misaki did Penance to get rid of the brutally annoying Firing Squad Injustice "Upgrade", then attacked The Guilty and missed. This gave the Guilty time to distract Misaki. Then the Oiran killed the Guilty.

The surviving Archer moved across the board to get into territory with Ototo, but so did Jaakuna and the non-distracted Drowned (with a Nurse providing Uppers to get them there) which denied the opponent VP. 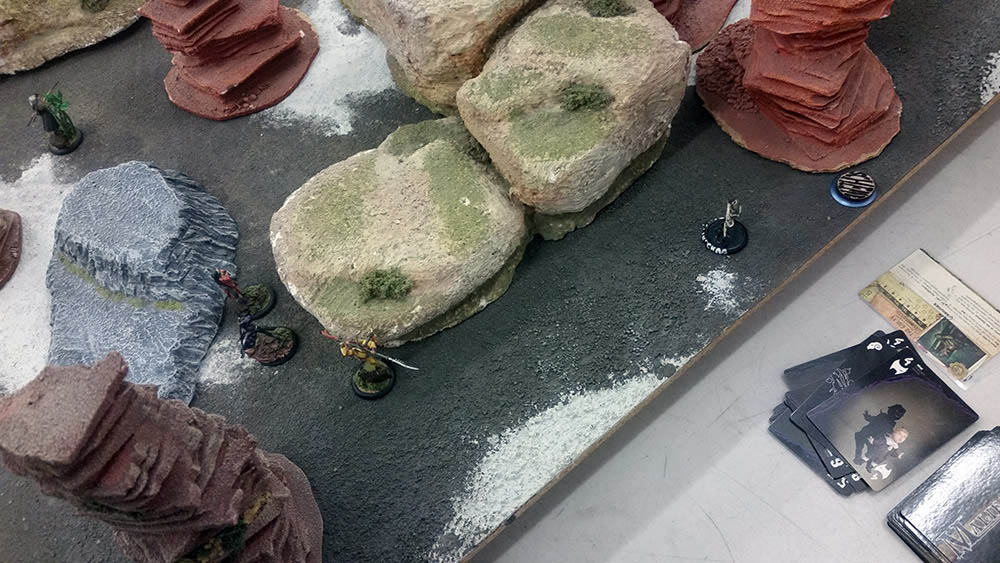 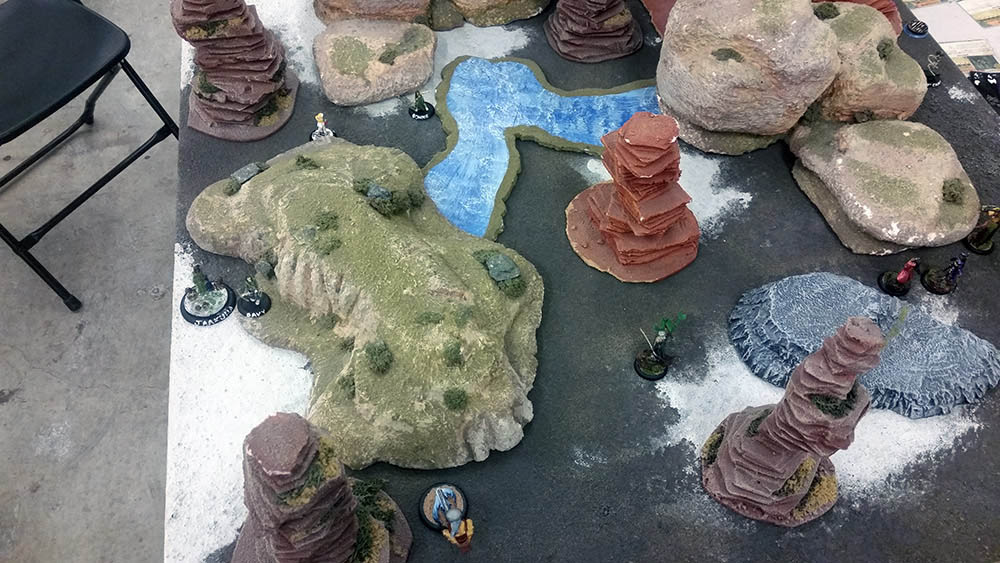 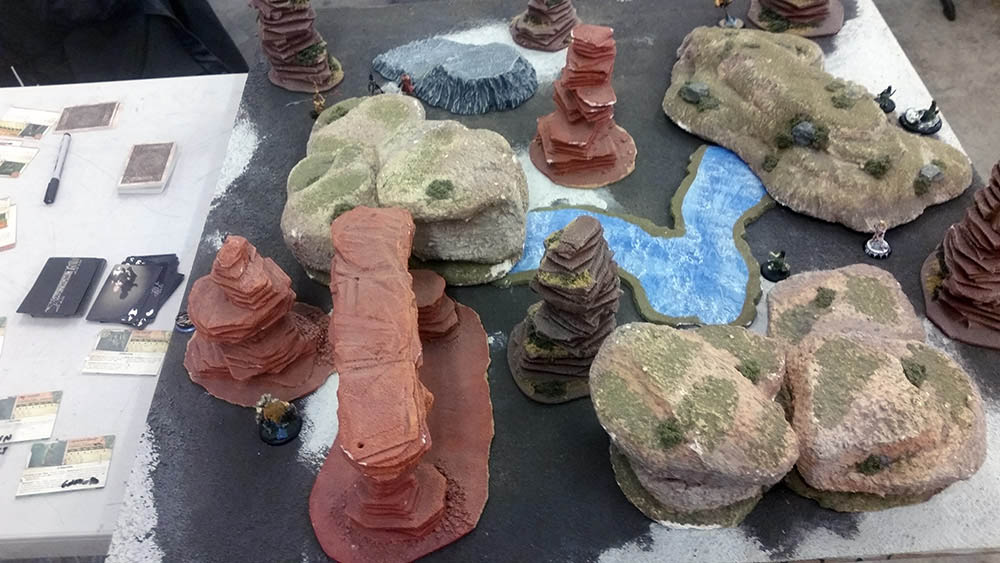 In which a mistake is made, a Drowned is immortal, and the Tormented catch up.

The Hanged tried to attack and kill Misaki with ranged attacks but failed, thanks to Misaki's insanely high Wp. Wp7 plus 2 from Oiran bonuses equals sorry, no Whispers for me.

Editors Note from Chung: We realized afterwards because of the wording on the Oiran's Appealing ability that the WP wouldn't have stacked so it should have only given her +1 to WP. It wouldn't have mattered anyways here.

An Oiran Lured the Hanged up to Misaki, but Misaki couldn't kill the Hanged and ended up spending a lot of cards on Terrifying checks in the attempt.

Then we made a mistake! Jaakuna lured Ototo in with Lure, which should have been impossible. We both forgot until it was too late. It probably wouldn't have matter much, because Jaakuna could have moved up and Lured the Drowned up instead, which would have had the same effect.

The remaining Oiran tried to pull the Drowned into the middle but didn't make it (yes, a model from The Lane moved out in non-Lane land, one of the few times there was a crossover between the two sub-battles).

Ototo took a Flurry against The Drowned with Chung's last card, a Black Joker. Of three hits, he only hit once, and The Drowned was too Resilient to care much.

A Thunder Archer also tried to kill the Drowned but didn't kill him. Long live the Drowned!

The Drowned then distracted Ototo, which was enough to put a very close game over the top.

Ted got 2 VP for Reconnoiter and Distract. Chung got 0 VP. 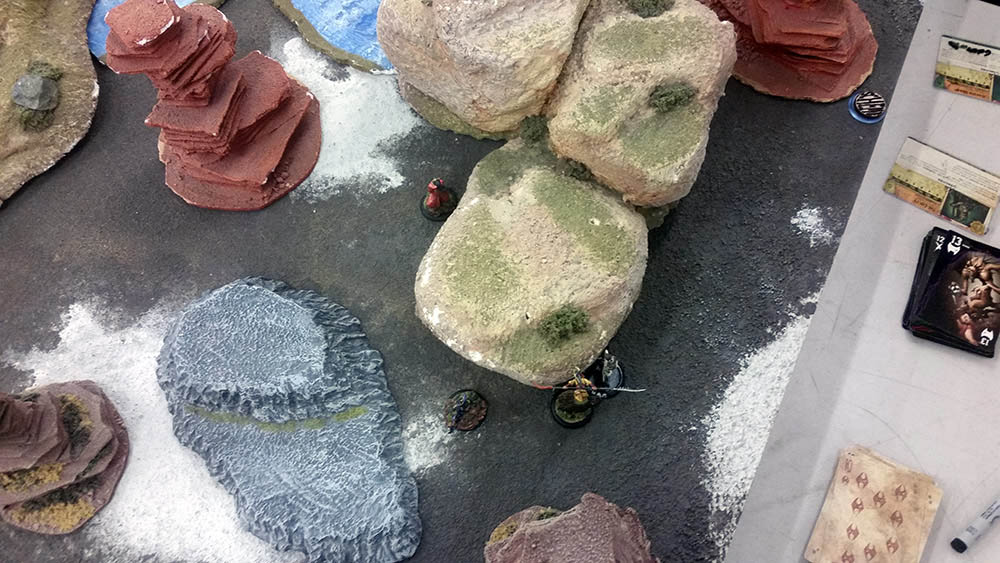 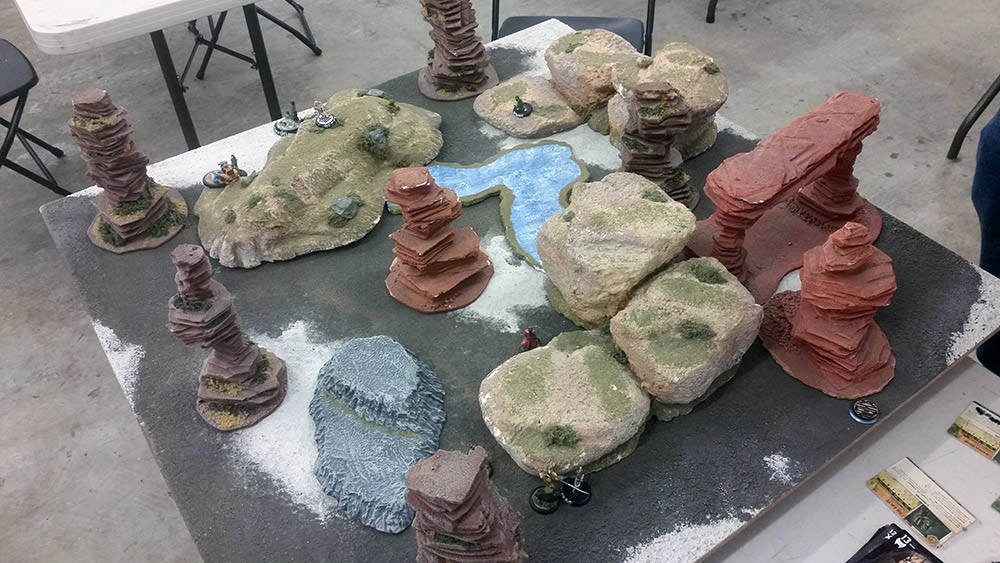 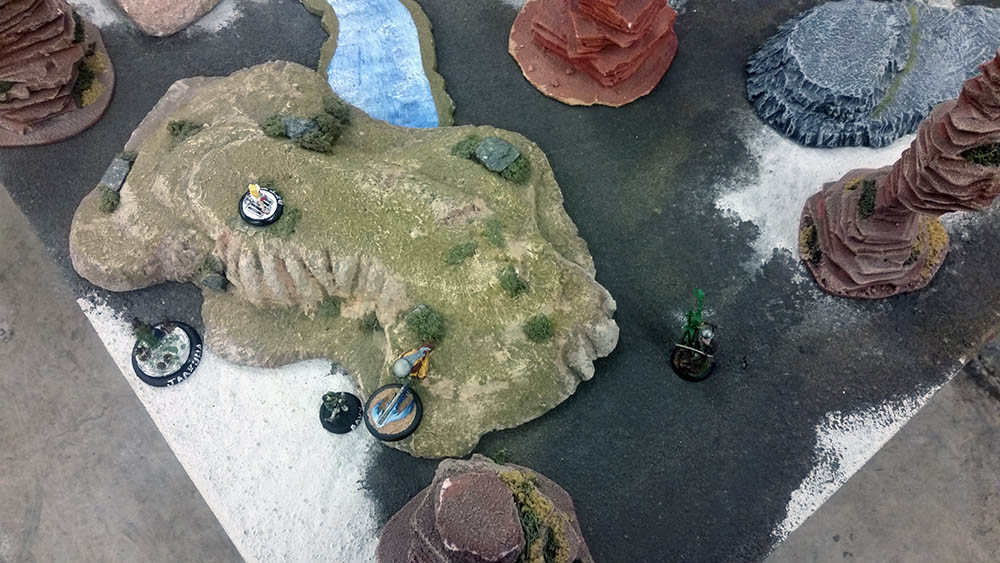 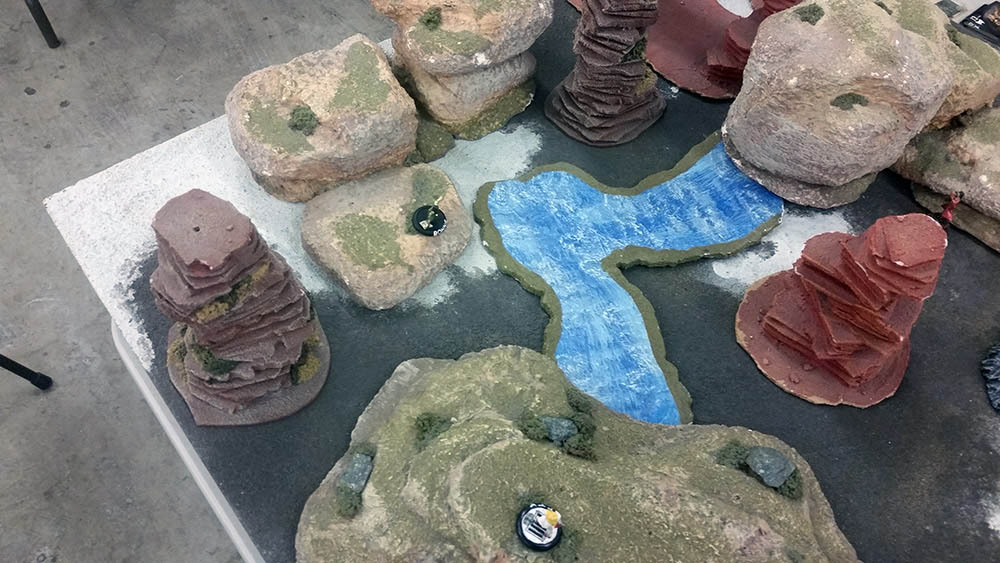 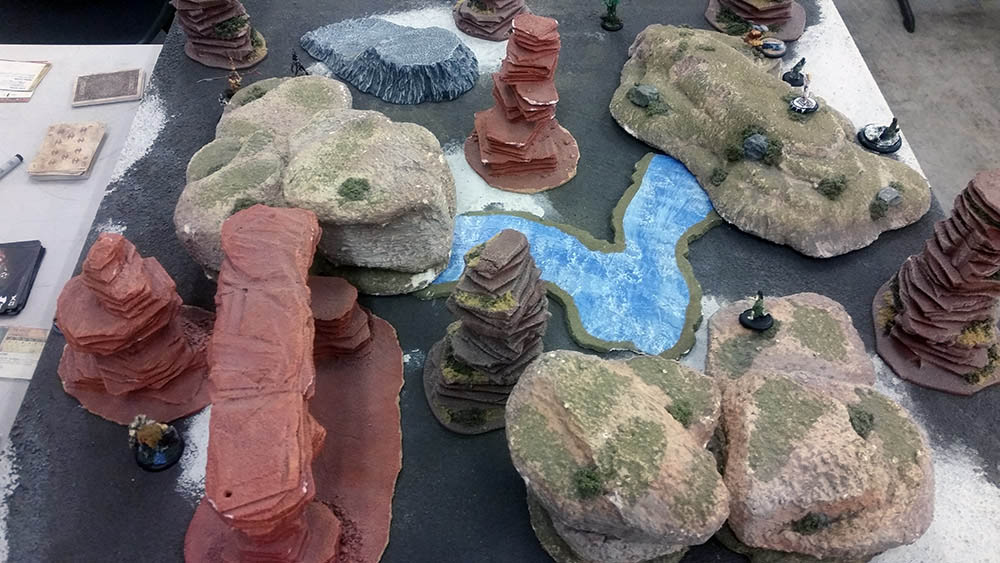 
To talk more Malifaux, join us over at the WGC A Wyrd Place Group!

About the Author
Ted aka Hateful Darkblack is an avid Malifaux player living in San Francisco, California. He has been playing Malifaux since 2011 and hasn't really played any other tabletop wargames, except maybe Battletech and Car Wars in the 80s as a teenager. You can see his Malifaux video tutorials at https://www.youtube.com/channel/UCgkdGXCg9O7MQqLTGuSXlVQ .
To leave a comment, please log in.