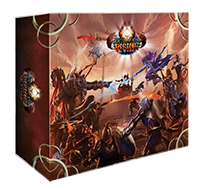 For a while now I've been speaking with Nikola Andrejic, one of the game designers behind Demigod Rising. Not only is this guy a pretty decent fellow but he's been reworking his game, Demigod Rising since they cancelled their first kcikstarter.

They recently relaunched this project and within 4 hours they were funded. What makes this second round of KS the big bomb?

When they launched the first kickstarter, a few big ones sprouted around theirs. This included KS from bigger companies like Arcadia, the latest Super Dungeon Explorer Expansion and Dreadball Extreme. This kinda drowned out their kickstarter from the big names. I guess this would be a perfect time to bring up the argument about why big companies shouldn't be using KS to sell their products. That, however, is better saved for a later article.

That was the big deciding factor for them to cancel their first kickstarter. However, they decided not to go down in defeat but to take all the feedback from their backers and make it work again. They took the opportunity to go back to the drawing board and fix and improve on Demigods Rising.

They went back and streamlined the game play. They adjusted the time to play a game under 30-90 minutes and made the game play work much more smoothly. They also took the time to go back and get more of the prep work done on the miniatures so they can have more of them ready for public eye.

They also contacted other gamers with social media reach to help get the word out on their game. They didn't wait last minute either and that's the key. If you need help spreading the word about your project, it's best to contact as many people with social media outlets to help. There are youtube channels, blogs and websites like Bells of Lost Souls and Beast of War. Depending on how well you impress they will usually help you push your project. It's content for them, it's exposure for you.

Always plan this part out. I don't know how many times people come to me asking for help to get out news about their project and it's already started or half way over. I often sit there having to ask, "Well, what do you need me to do now?". Usually by this time all I can do is share it on facebook. That's usually not enough. You have to generate interest and to do that, you got to have time to plan for that.

But I digress here. The lesson here is be prepared ahead of time and never be afraid to ask people to pimp out your stuff. The worse they can say is "No" or blatantly ignore your message. And that really doesn't hurt you anyways. You just move on and work with those that will.

Let's get on with Demigod Rising. I love most of the figures that they are coming out with. Other than the ones included in the game box which are going to be plastic, they are releasing more detailed ones in resin through Titan Forge for the hobbyist who just might want to paint them or for the fans that want their game pieces to look better. These you can buy separately. Here are some of my favorites:

I'm not sure what scale these miniatures are. I would probably put them around 38mm and stamp "heroic" along side of that. The miniatures from the box are all assembled. The resin blisters require assembly. Best of both worlds here.

As for game play, they have a game play video out on their kickstarter and when we get the prototype box here we'll run through some games ourselves. As far as I can tell, it looks quite fun. It really brings me back to my WOW arena days. That can be good and bad! It doesn't come with a "general chat channel" so it should be on the good side! (Kudos if you understood that reference!) 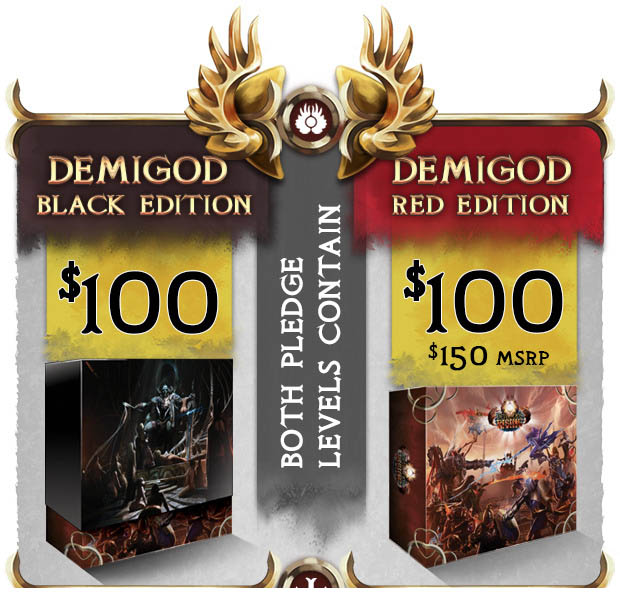 And the pledges? There are really just two choices and that's all you really need. $100 pledge for the black box edition (which is all gone now) or the red box edition. There's really no difference other than the black box sleeve looks more slick. Everything else is the same on the inside, just like you and I (Can't we all just get along?).

The kicker here (get it?) is that the $100 pledge includes the base game, the expansion pack, the kickstarter bonus pack AND all the unlocks. As of the writing of this article, they are already 209% funded with 3 out of 5 stretch goals unlocked.

I've already put in my $100 pledge even though they sent me some mini's and the prototype game to follow, I would love to get the rest of them and plan to add on some of the resin version of my favorites!

So I get in your pledge! Not only is your $100 going to get you the game but it pays for all the miniatures itself and the expansion and the kickstarter exclusive pack. I also want to see them hit 100k for the Fire and Ice Elementals!

Again, this is one of those great reboot stories I like to see happening. I think not only am I pledging to help a great guy (Nikola is very passionate about this project) but because they came back around the second time to do it better. Here's to Nikola and his team and to his wife and upcoming newborn! Never give up! Never surrender!

What about you? Have you or are you pledging? What are your favorite miniatures in this game? Are you planning to addon any of the resin versions? Let us know in the comments below and keep an eye out here in the near future for video coverage on this game!

If you love this kickstarter, be sure to help out by sharing and liking this article!

Chung runs the Wargamers Consortium and has been painting and playing wargames for more of his life. He loves to get into different types of wargames and spends most of his time making videos for others to learn and enjoy.
To leave a comment, please log in.